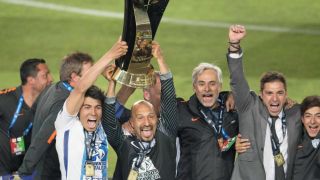 Pachuca defeated Tigres UANL 2-1 on aggregate to win the CONCACAF Champions League and book a place at the FIFA Club World Cup.

Franco Jara scored the only goal of the match as hosts Pachuca won Wednesday's return leg 1-0 against Tigres, who ended the all-Mexican decider with 10 men following a red card to Guido Pizarro.

Jara was on hand to fire home the rebound from close range in the 83rd minute, sealing a second Champions League title and a fifth CONCACAF club trophy for Diego Alonso's Pachuca.

Tigres star Andre-Pierre Gignac equalised in stoppage time but it was ruled out for offside as Pachuca earned a spot at the Club World Cup in the United Arab Emirates in December.

It was all to play for following the 1-1 first-leg draw at Tigres last week.

Eduardo Vargas - who was dropped to the bench for the second leg - missed a penalty as Tigres were held at home and it came back to haunt his team.

Both goalkeepers were kept busy as Pachuca's Alfonso Blanco and Nahuel Guzman of Tigres thwarted Gignac and Jara in the first half.

Tigres were dealt a blow in the 78th minute when Pizarro saw red for a second bookable offence and Pachuca - who have never lost in 15 Champions League home games - made the most of their numerical advantage.