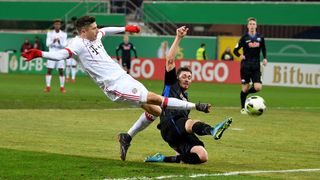 Bayern Munich breezed into the semi-finals of the DFB-Pokal with a 6-0 win over Paderborn on Tuesday.

First-half goals from Kingsley Coman, Robert Lewandowski and Joshua Kimmich laid the foundations for a comfortable victory at Benteler-Arena, while a header from Corentin Tolisso and an Arjen Robben double added gloss for Jupp Heynckes' side after the break.

It means their hope of a second treble under Heynckes, under whom they won the Bundesliga, DFB-Pokal and Champions League in 2012-13, remain intact.

The visitors, who fielded a strong line-up against the 3.Liga leaders, survived a close offside call in the early exchanges before Coman and Lewandowski struck to put them in charge, the latter taking his tally for the season to 25 in all competitions.

Kimmich added a third ahead of the interval and Tolisso's emphatic finish made it 4-0 with just 55 minutes played, before two late Robben goals saw Bayern secure their place in the last four in style.

The Bundesliga leaders, who are on an 11-game winning run, now turn their attention to top-flight meetings with Schalke and Wolfsburg before the first leg of their Champions League last-16 tie with Besiktas on February 20.

Lewandowski had a header saved early on but Bayern were fortunate to avoid going behind eight minutes in, when Sebastian Schonlau's goal was ruled out for offside despite the centre-back appearing to be level following Marlon Ritter's free-kick.

Bayern soon took charge of proceedings. With 19 minutes played, Coman swept home from six yards out after Thomas Muller saw a shot blocked in a scramble in the penalty area.

The away side doubled their lead six minutes later, with Lewandowski chesting down and firing expertly across goal and into the left-hand corner after being picked out by Coman.

Muller was withdrawn after picking up a knock but it was 3-0 before half-time, with Kimmich allowed time and space in the penalty area to think about squaring for Lewandowski before clipping a clever finish past goalkeeper Michael Ratajczak.

Tolisso, who replaced Muller in midfield, saw a shot pushed around the post by Ratajczak seven minutes after the restart, but he made it 4-0 from the resulting corner, powering home a header from James Rodriguez's delivery as the Paderborn defence disappeared.

The scoreline was harsh on the home side, who had performed well, and their frustrations deepened when Ben Zolinski's shot deflected off Niklas Sule and came back off the right-hand post.

Ritter was denied by Sven Ulreich in the Bayern goal after another promising counter-attack, but Heynckes' men were otherwise untroubled before Robben blasted home from the edge of the area in the 86th minute after Sebastian Rudy's clever lay-off.

Robben scored his second two minutes later, converting a simple tap-in after Franck Ribery had eluded the offside trap, as Bayern secured a semi-final date on either April 17 and 18.