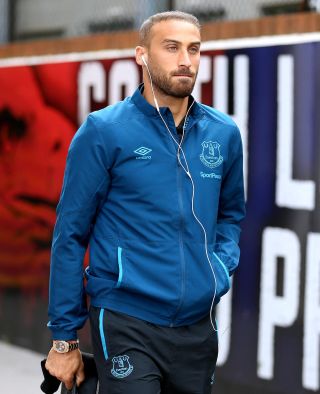 Crystal Palace manager Roy Hodgson is delighted to finally secure the services of Cenk Tosun on loan from Everton and is hopeful Tottenham defender Kyle Walker-Peters will join him at Selhurst Park.

The Eagles announced the addition of Tosun on Friday on a deal until the end of the season and he could make his debut in Saturday’s home fixture with Arsenal.

Palace were in for the 28-year-old Turkey international a few transfer windows ago but lost out to Everton.

Tosun has struggled to replicate his excellent form for Besiktas at Goodison Park, with the forward netting 10 times in 51 appearances for the Toffees.

“As long ago as two years ago now, when we were looking to improve our striking force, Cenk’s name came up and he was heavily scouted,” Hodgson said.

“There was a serious interest in us signing him but Everton won the race for his signature so it’s nice now to have a second bite of the cherry, especially at a time when we are desperately in need of improving our striking force.

“We feel we know him and what he can do and what qualities he’ll bring. To some extent we feel he could have been a Palace player a lot sooner.”

Only Watford have scored fewer Premier League goals this season than Palace, who have managed just 19 in 21 games despite sitting in the top half of the table.

Hodgson will hope Tosun’s arrival will ease the burden on Jordan Ayew and Wilfried Zaha, who have five and three goals respectively this season.

The former England boss added: “He is in contention to be in the squad. I’m grateful to Everton and Palace for getting it done so quickly to make him available because we still have eight players unavailable.

“He’s full of enthusiasm because he hasn’t seen much game time at Everton and is desperate to get onto the field to show what he can do, especially with the Euros coming up.”

It is expected Tosun will be the first of several arrivals at SE25 during the January transfer window, with Hodgson hopeful Spurs right-back Walker-Peters will sign this month.

A loan deal has been mooted since last summer and Palace desperately need more cover in the full-back areas with Joel Ward (knee) and Patrick Van Aanholt (hamstring) out with injuries.

“I’m optimistic and hopeful that we can get Kyle here but I don’t have any update on the situation,” he added.

“I am not prepared to deny either that those discussions are taking place and I remain very hopeful we will be able to bring him in because he’s a very talented young player and we would benefit from his services.”

Hodgson rejected claims that Bayern Munich made a loan bid for Zaha this week and also revealed the talisman will be fit to face Arsenal.

The Gunners were interested in the Ivory Coast international during the last transfer window, but failed to match Palace’s valuation and actually travel across London sitting a place below the hosts in 10th.

Mikel Arteta’s arrival last month has boosted Arsenal, though, who have won back-to-back games under the Spaniard.

“We are aware Arsenal are in a good vein of form and seem to be buoyed by Mikel coming in and we will have to be ready for that,” Hodgson said.