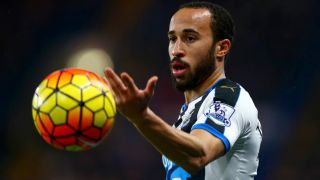 Crystal Palace have announced the signing of Andros Townsend from Newcastle United on a five-year contract for a fee of £13million, meeting the winger's buy-out clause.

Townsend joined Newcastle from Tottenham in January, scoring four times in 13 appearances as the club suffered relegation from the Premier League.

The 24-year-old was named in Roy Hodgson's preliminary England squad for Euro 2016, but was left out of the final party for the competition in France.

BREAKING: #CPFC have completed the signing of @andros_townsend for £13m on a five year deal!#WelcomeAndrospic.twitter.com/lb759ljtkw

Townsend will continue his top-flight exploits at Palace and is excited to begin a new chapter in his career.

"I'm extremely delighted. I had chats with the manager and chairman before I signed and I'm pleased to a part of Crystal Palace's future," said Townsend.

"By the sounds of things it's going to be a bright one and I can't wait to get started."

Chairman Steve Parish added: "It's fantastic that we've managed to get a player of Andros' quality into the club.

"He has played in the Premier League for a number of years and represented England on many occasions and yet he's still only 24 years old.

"Andros is another exciting attacking talent that we have added to our ranks and I can't wait to see him in a red and blue shirt in the very near future."

Going in the other direction, Dwight Gayle has joined Newcastle from Palace, also on a five-year deal, at the cost of £10m.

Gayle made just eight Premier League starts for the London club last season after falling out of favour, but he is keen to prove himself at St James' Park.

"It's a dream come true to be at a big club like this," the 25-year-old said. "Newcastle has a massive fan base and a great history so it is amazing to be here.

"I can't wait to get started, prove myself and score the goals that take us back up to the Premier League. It's where this club belongs."