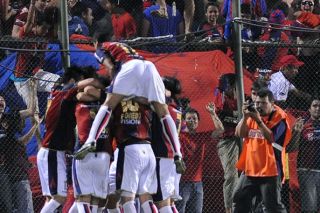 Striker Guillermo Beltran got Cerro Porteno off to superb start after only 10 minutes before Angel Romero continued their momentum going into half-time with a 43rd minute strike.

Olimpia fought back in the second-half, pulling a goal back through Diego Centurion but they could not find an equaliser.

Diaz had a terrible start, going behind after six minutes to Francisco Vera's strike.

But Diaz regrouped in the second-half, equalising through Diego Doldan in the 65th minute before winning the game with a penalty from Cristian Martinez four minutes from time.

Nacional Asuncion secured their first win of the season with a 5-2 triumph against Deportivo Carapegua.

Asuncion claimed a dream start, as they scored in the first minute from Cesar Caceres Canete's penalty before Alfredo Mazacotte doubled the lead on 9 minutes.

When Canete scored his second goal in the 16th minute the game was effectively over despite Cristian Ayala pulling a goal back for Carapegua on the stroke of half-time.

Asuncion added two more goals in the second-half through Juan Arguello and Marcos Prieto while Ruben Caceras scored a consolation goal for Carapegua.