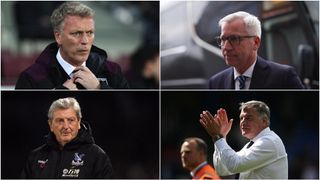 Critics have long voiced concerns that foreign imports are preventing young British coaching talent from getting a chance to shine in the world's most lucrative division.

However, it could be argued that the same parade of familiar faces being called upon when the prospect of relegation threatens those very financial rewards is truly causing the blockage for the next generation.

West Brom, previously led by Hodgson, are the fifth club ex-Palace and West Ham boss will lead in the English top-flight, while Sam Allardyce – Hodgson's fleeting successor with England who shares three common former employers with Pardew – has been heavily touted with taking on an Everton side in freefall.

At present, this quartet have 20 Premier League jobs to their collective names without winning a single major honour. Perhaps the nub of the issue, however, is the fact they have only been stained by two relegations.

Having cut his managerial teeth with Reading, Pardew took the reins at West Ham in September 2003, leading them to promotion from the Championship the following season. The Hammers finished ninth on their top-flight return, lost a thrilling FA Cup final to Liverpool on penalties and qualified for Europe. However, he was sacked with them in the relegation zone in December 2006 and quickly hopped across London to take on a Charlton Athletic side in a similar predicament. Pardew could not save them from the drop and a spell outside the top flight continued until Newcastle United surprisingly came calling in December 2010.

The highlight of an often tempestuous four-year tenure came with a fifth-place finish in 2011-12. The lure of Crystal Palace, where Pardew was a hero during his playing days, proved significant in December 2014. He guided them to a 10th-place finish from the relegation zone but, in an echo of his West Ham tenure, was sacked seven months after reaching the 2016 FA Cup final. Allardyce came in as Pardew's successor.

Comfortably the most worldly of the quartet, Hodgson had blazed a trail across Scandinavia, led Switzerland to the 1994 World Cup and coached Inter Milan before taking over Blackburn Rovers for the 1997-98 season. He sealed a UEFA Cup place but was sacked in December of the following campaign – one that would end in relegation for the 1994-95 champions. Hodgson masterminded a remarkable escape from that very threat for Fulham a decade on and helmed an unlikely run to the Europa League final for the London club.

That paved the way for a big opportunity at Liverpool, where the veteran coach bombed spectacularly. His reputation was restored sufficiently at West Brom to seal the England job and, following a year-long hiatus on the back of a chastening Euro 2016, Hodgson returned as a tried-and-tested alternative to Allardyce's swiftly deposed Palace successor Frank de Boer.

Moyes' impressive work in the lower leagues with Preston North End saw Everton take a punt on a bright, young British boss in March 2002. It began an 11-year relationship where the stock of club and manager rose in tandem, with Everton a constant menace to English football's established elite. Moyes won his place at that level when he was installed as Alex Ferguson's successor at Manchester United in 2013. An impossible job, perhaps, but not one he was entitled to make such a hash of – a six-year contract did not help him to see out the season.

A sojourn to Real Sociedad was notable for a surprise January 2015 win over Barcelona and little else, and West Ham were not put off by Sunderland shambling to a meek relegation under the Scot last term.

Having battled against relegation in his first two seasons after leading Bolton Wanderers to the Premier League, a team boasting the dazzling talents of Jay-Jay Okocha and Youri Djorkaeff finished eighth and reached the League Cup final in 2003-04 to suggest bold new horizons. Sixth place and a UEFA Cup berth followed in 2004-05 but frustrations over the limits of Bolton's ambition led Allardyce to resign in April 2007 and into the arms of Newcastle. He was sacked by January 2008 and has since existed as a fire-fighter in the lower reaches of the table, guiding Blackburn Rovers and Sunderland away from peril either side of making West Ham's 2011-12 promotion stick.

6 - Sam Allardyce is the only manager to have taken charge of as many as six different teams in the . Medley. May 23, 2017

Allardyce's exploits at Sunderland brought him an England job he promptly lost in 67 days amid an off-field sting and he was back in the fray for a six-month salvage job at Crystal Palace. Reports on Wednesday that 63-year-old has agreed to succeed Ronald Koeman at Everton means his post-Palace retirement looks set to prove predictably short-lived.