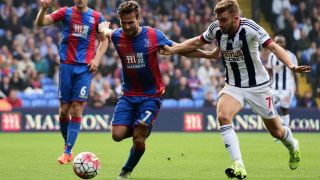 The France international signed from Paris Saint-Germain for a club record fee in July and has made a big impact at Selhurst Park, appearing in every Premier League fixture to help Palace up to fourth.

And Pardew has lauded the midfielder and likened his influence on Palace's play to that of former Manchester United midfielder Roy Keane.

"He's one of the top players I've had in terms of being able to trust how the game is evolving. He can smell what to do at the right time," the 54-year-old, who coached Cabaye at Newcastle United, told The Guardian.

"It's very important for a manager to have a lieutenant like that - like Roy Keane at Manchester United.

"I'm sure Fergie [Alex Ferguson] could look at him and he'd know when to push the team forward or sit in. At all those moments it's very important to have a lieutenant."

The Palace boss was also pleased that Cabaye's fighting qualities have been on display, proving he has multiple facets to his game.

"On the training ground he's shown he's not just a passer of the ball. Of course, I knew that but perhaps he needed to show to a few of our warriors here that he knows how to battle as well," Pardew added.

"He didn't have to do that so much [against West Brom] but he certainly did at Watford last week."

Pardew revealed that the former Lille player's record-breaking arrival caused some concerns in the boardroom,  but he insists there have not been any adverse effects on the rest of the squad.

"It was a deal that knocked us out of kilter and the chairman and the board were worried about that," Pardew said.

"But I assured them that there's no player that can knock on my door and say: 'I want the same money as Cabaye.'

"If you increase the wage structure because someone has come in and they don't deliver, then you have got a problem.

"But they can all come and knock on my door on Monday and ask for more money, saying, 'I want Yohan's money,' and they'll get a simple answer: 'You're not as good as him.'"