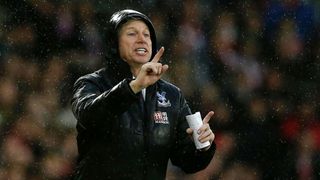 Former Portsmouth defender Joel Ward opened the scoring for Palace at the St Mary's Stadium in the first half, before Wilfried Zaha's controlled volley won it in the 69th minute following Oriol Romeu's equaliser.

Palace were forced to weather a few storms with Shane Long and Steven Davis missing chances, while Virgil van Dijk rattled the post in the last minute.

And manager Pardew - a former Saints boss - was thrilled with the way his team ground out the win to book a place in round four.

"This is what this team's about. We're difficult to score against with a good back four and goalkeeper. We can kill teams on the break," he told BBC Sport.

"We have a great resilience. You look at our record of teams scoring an equaliser, we go on to win more than we lose.

"Looking at the [other third-round] results I'd say we've had the best result of the FA Cup this weekend."

Pardew also confirmed that he is aiming to bolster his attacking options in the January transfer window, but ruled out making additions in defence or midfield.

"We've been linked with a couple of defenders, there'll be no defenders coming to this football club," he added.

"We've been linked with a couple of midfielders, there'll be no midfielders coming to this football club.

"We will be looking for an offensive player, a striker-type player. Hopefully we can get someone in before the end of January."