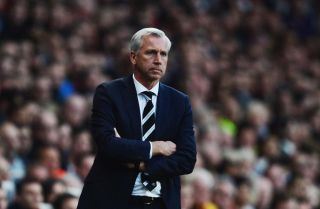 Laurent Koscielny, Mesut Ozil and Olivier Giroud all found the net as Arsenal claimed a comfortable 3-0  home win over Pardew's men on Monday, consigning Newcastle to their worst losing league run since 1987.

The third goal prompted the unfurling of banners calling for Pardew's exit among the travelling supporters, but the Newcastle boss was defiant in defeat, stressing that he saw his position at Newcastle as a "long-term opportunity".

"I've lost six on the trot as manager of Newcastle and I accept that they're disappointed and angry at the moment that we haven't got a result," he told Sky Sports.

"But I think that the bigger picture is that we're in a good position in the summer and we need to focus on finishing in the top 10.

"Of course you're under pressure, it's a big club.

"They expect perhaps sometimes things we can't quite deliver, but we're trying our hardest and we're going to work hard this summer to make sure we've got a team next year that can make this city proud.

"I'm looking at the job as a long-term opportunity for myself.

"The most important thing for us right at this minute, at this club, is to get our fans (back onside) - hopefully they come and back us and help the players get a win, because I feel for the players at the minute. They're playing under a lot of pressure, there's a lot of pressure on me, and they can sense that too.

"I think on Saturday (at home against Cardiff City) we'll be really up for it and hopefully we can get a win."