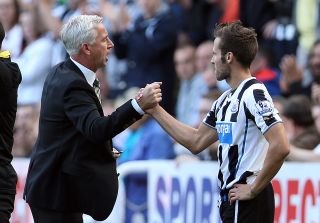 Cabaye came off the bench during Saturday's 1-0 home win over Fulham, and afterwards Pardew urged the player's agent to make a decision.

The France international reportedly refused to play after Newcastle rejected a bid from Arsenal for his services, and Pardew is eager to replace Cabayer, if he is to leave

"We've told his agent 'come on, play the game' because we've got to replace him," he said.

"And we can't afford to replace him before he goes because we're not sure he is going to go. So that bid needs to come in - if it's coming in - early, if not it won't happen.

"Well I think it won't happen but you can never tell with this football club. We've got replacements in mind but we need to act quickly if that bid comes in.

"We still hope to get an offensive player in and we're working towards that."

Cabaye replaced Vurnon Anita midway through the second half and was greeted with a mixed reception from the Newcastle fans.

After the game, Pardew explained his reasons for starting with Cabaye on the bench.

"Because Anita and Moussa (Sissoko) I thought were terrific against West Ham last week," he said.

"I have to be fair to all my squad. I'm not going to suddenly put in a player, as great as Yohan is, straight into my team. So he had to wait his time and I think he made a really good contribution.

"I think the fans called it right today.

"I think half of our fans were more or less saying 'we're not sure about what you've done' and the other half were just pleased to see him and I think that was fair.

"But to be fair to Yohan, because he's so focused on his game, he put that all to one side and came on and played a normal game for us.

"And that takes some doing, trust me, so hats off to him for doing that."