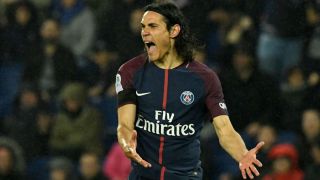 Edinson Cavani scored two late goals to spare Paris Saint-Germain's blushes as the Ligue 1 champions fought back to salvage a 2-2 draw against Guingamp.

The Uruguayan forward became his club's all-time leading scorer in the French top-flight when he converted a 75th-minute penalty, going clear of Zlatan Ibrahimovic in the record books.

Having halved the deficit, Cavani made sure the title winners avoided suffering a first home defeat in the league this season by heading home Thomas Meunier's cross.

The result was tough on Guingamp, who are mathematically safe from the drop and still in with an outside chance of finishing in the top five and played like a side with nothing to lose and everything to gain.

They took the lead in spectacular fashion, Ludovic Blas letting fly with a left-footed rocket to beat Alphonse Areola in the 45th minute, the ball curling away from the goalkeeper as it flashed into the net.

Jimmy Briand completed a swift counter triggered by Clement Grenier to double their advantage, only to carelessly give away a penalty at the other end that triggered PSG's comeback bid.