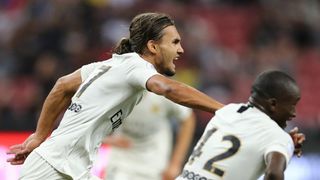 Thomas Tuchel recorded his first win in charge of Paris Saint-Germain as the Ligue 1 side beat Atletico Madrid 3-2 in a thrilling International Champions Cup clash thanks to a stunning late goal from Virgiliu Postolachi.

Christopher Nkunku's first-half strike put PSG on track for three points to round off an underwhelming ICC campaign that had seen Tuchel's men lose to Bayern Munich and Arsenal.

And when Moussa Diaby added a drilled second PSG looked set to close out an easy victory ahead of their competitive 2018-19 bow against Monaco in Saturday's Trophee des Champions.

Atletico beat Arsenal on penalties in their last ICC match and Diego Simeone's side looked set to have the chance to repeat the trick after coming from two down in Singapore on Monday.

Victor Mollejo finished off a rebound with 15 minutes to go, giving Atletico hope of a fightback, which was seemingly completed when Antoine Bernede diverted a low cross into his own goal.

But in the second minute of added time, teenager Postolachi bent a brilliant left-footed curler beyond the despairing dive of Antonio Adan to ensure PSG ended their ICC campaign on a high.

FULL TIME: A thrilling end to an exciting win for PSG. Well done lads and thank you Singapore!! July 30, 2018

Kevin Trapp was smartly off his line to keep out Angel Correa's shot in the eighth minute after Kevin Gameiro got the better of Lassana Diarra in the left channel.

Former PSG attacker Gameiro was proving a handful but he should have scored when racing on to a long pass, the French forward instead lifting his shot over the crossbar.

Angel Di Maria was making his first appearance since the World Cup and the PSG star sent a volley flying wide after failing to make a clean contact on the speculative effort.

But PSG took the lead in the 32nd minute, Nkunku coolly tapping in from close range after Layvin Kurzawa's shot was blocked by Juanfran, the 20-year-old forward adding to the goal he scored against Arsenal last time out.

Atletico almost equalised before the break but Kevin Rimane made a fine clearance on the line to deny Luciano Vietto, who could not take advantage with Trapp out of position.

Timothy Weah was close to doubling PSG's lead after beating Adan to a loose ball but the striker's poked effort dribbled wide, Gameiro then firing straight at Trapp at the other end.

After making wholesale changes PSG were looking more open at the back, but Vietto could not turn a loose ball home at the far post as Atletico continued to be wasteful in front of goal.

72' GOOOOOOOOAAAAAALLLL!!! Moussa Diaby gets his well-deserved goal with a lovely left-footed finished from the edge of the box! 2-0 July 30, 2018

And those missed opportunities proved decisive as Diaby was teed up by Weah after sloppy passing from Atletico, the substitute thumping in a low drive moments after he was denied a brilliant volleyed goal by the woodwork.

Atletico set up an exciting finale when Mollejo capitalised on chaos in the PSG box from a corner to hammer in from close range at the second attempt.

Simeone's men showed their fighting spirit when Bernede turned a Borja Garces cross past Trapp and into his own goal to seemingly send the tie to a penalty shoot-out.

Postolachi had other ideas, though, collecting a pass from Jean-Christophe Bahebeck and shifting the ball on to his left foot to whip a superb strike from 25 yards past Adan's grasping right hand.