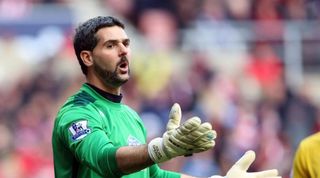 The Argentine goalkeeper has spent a decade at Selhurst Park, but will be a free agent next month unless he puts pen to paper on a new deal.

Speroni has been linked with a move to Italy as well as Sunderland and Leicester City, but Parish is eager to retain the 34-year-old's services.

The arrival of Wayne Hennessey in January raised questions over Speroni's role at the club and Parish plans to wait until manager Tony Pulis has held talks with the long-serving keeper before a decision is made on his future.

"There is no date set but I think everyone wants a little break," Parish told the Croydon Advertiser.

"Tony is going to have a chat with Julian and talk to him about where he sees him and how he sees it going forward.

"We would all like to keep Julian at the club, of course we would. It's looking for a long-term plan as well.

"I think we would like to see Julian really staying at the club and having a future, maybe on the coaching side,

"He's a massive part of the fabric of Palace.

"Right now Julian wants to play and so he should, he's a fantastic keeper and a brilliant servant for the club.

"He needs to sit down with Tony in the first instance and then I'm sure I'll get involved from there."