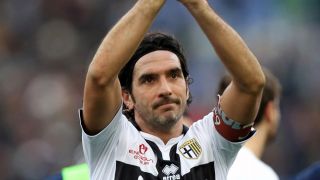 The Serie A strugglers are due to travel to the Stadio Comunale Luigi Ferraris this weekend, but the fixture looks unlikely to go ahead as the Parma squad take a stand.

Parma have been beset by financial trouble this season, were deducted one point for failing to pay their players and had to postpone their game against Udinese last weekend because they could not afford to open their stadium.

The Italian Footballers' Association (AIC) announced on Thursday that a decision has been made to start all this weekend's games 15 minutes late as a show of solidarity for the players at Parma.

Parma sit bottom of the table and further sanctions could follow should they be unable to improve their situation.

"My team-mates and I have decided not to play in Genoa," Lucarelli said.

"We took this decision after a meeting with the AIC."