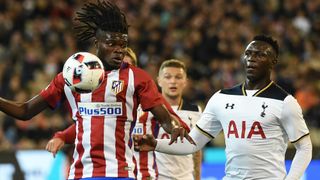 Thomas Partey is hoping to make his mark on the Atletico Madrid squad in 2016-17 and is looking to bring titles to the Vicente Calderon.

Partey played a starring role as Atletico defeated Tottenham 1-0 in the International Champions Cup in Melbourne on Friday.

The 23-year-old won the free-kick that led to the only goal of the game - scored by Diego Godin - and was a constant threat in his 74-minute outing at the MCG.

Having featured just 13 times in LaLiga last season for Atletico, Partey is hoping to play a more prominent role under Diego Simeone this time around.

"Everything depends on your work. In this team, the more you work the better your chances are of playing," he said.

"Hopefully my work this year leads to more games."

Partey started the game out wide in left midfield, before being moved into a central role for the second period, where he appeared to look more comfortable.

Asked if he prefers to play through the middle, Partey said: "I am comfortable playing in any position.

"I try to do the best in whatever [Simeone] needs and I want do to the best for the team and hope we keep advancing."

Partey featured as a substitute in Atletico's run to the Champions League final last season, where they lost out on penalties to bitter rivals Real Madrid, and hopes the side can reach the decider again this upcoming season but with a different outcome.

"We want to win every single game that comes, and to try and reach the final again and see if we can win titles this year," the Ghana international said.

Atletico play A-League outfit Melbourne Victory on Sunday, before flying back to Europe for scheduled friendlies against Galatasaray and Cadiz ahead of the new season.