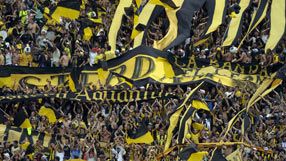 Also at the weekend, Cucuta became the last qualifiers for the eight-team title play-off in the Colombian Clausura championship.

All eyes were on former Uruguay coach Juan Ramon Carrasco when he came to his dugout for his first "clasico" as Nacional's trainer on Sunday.

Long before then, the Centenario stadium had been filled almost to capacity by a 58,000 crowd that produced an atmosphere worthy of one of the world's big derbies between two sides who between them have been crowned South American champions eight times.

There were fireworks, coloured smoke and ticker tape welcomes for both teams when they came out.

Banners in the visiting black and yellow Penarol sector of the stadium read "We forgive you your envy" and "Poor are those who don't feel it (the passion)".

Nacional, the home side on this occasion at the national stadium, occupied three quarters of the tribunes with their red, blue and white colours. One of their banners said: "There is no loony-bin big enough for such craziness".

Carrasco was unable, though, to celebrate a victory as Penarol got the 0-0 draw that suited the champions. He remains unbeaten after four matches with Nacional but dropped his first points.

"It wasn't nice because there was one team (Nacional) that always wanted it and another that didn't propose (playing) and cut (our moves)," he told reporters.

"I think that if your goalkeeper doesn't make any saves, there's not much else you can read into it."

Cucuta won 2-0 away to Real Cartagena on the Caribbean coast and snatched the eighth and last berth in the Clausura title play-offs.

Tolima and Once Caldas finished as joint leaders of the overall qualifying standings and will each head a four-team semi-final group, while Independiente Santa Fe, Atletico Nacional, Quindio, Atletico Huila, Cucuta and La Equidad were going into Monday's draw to decide which teams join them.

Champions Colo Colo were upset 1-0 at home by relegation-threatened Santiago Morning, their third match without a win, and were caught at the top of the standings by Universidad Catolica.

With three matches to go, Colo Colo y Catolica have 65 points, Universidad de Chile 61 and Audax Italiano 59 after their 5-2 win over Palestino kept them mathematically in the hunt for their first title since 1957.