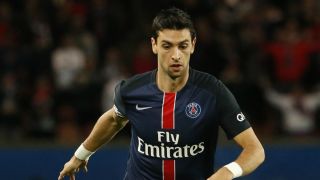 Javier Pastore is adamant he is happy with life at Paris Saint-Germain, but has suggested he could be open to a return to Serie A at some point in the future.

The Argentina international joined PSG from Palermo in 2011 and has since been linked with a return to the Italian top flight on more than one occasion.

However, he has made it clear has no intention of leaving PSG in the near future.

"I am feeling well at Paris Saint-Germain, very well. We have a great team and win trophies every season. I could not ask for anything more," the 27-year-old told Corriere dello Sport.

"A return to Serie A? You never know what will happen in the future. Maybe PSG decide in December that they no longer need me. Who knows? But for now I am feeling like God in Paris, even if I really like Italy.

"Juventus tried to sign me during my second season at PSG. I wasn't always playing and they made an enquiry about my availability. It's always nice when a big team likes you.

"Milan, Inter and Roma all wanted me before I joined PSG. But I wasn't cheap and president [Maurizio] Zamparini preferred to sell me to a foreign club because they were offering more money. I never had any doubts when PSG came knocking."