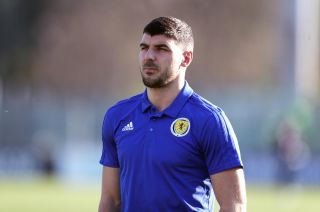 Neil Warnock has bemoaned Cardiff’s costly international break which has seen them lose Callum Paterson for the rest of the season.

The veteran manager also accused Iceland of “selfishness” over their use of midfielder Aron Gunnarsson against Andorra and France.

Paterson damaged his ankle during Scotland’s 2-0 European Championship qualifying win in San Marino – having sat out the opening game with Kazakhstan precisely because of concerns how a long-standing knee injury would stand up to the artificial pitch in Astana.

The versatile 24-year-old, who can play in either defence, midfield or attack, will have an operation on Monday and miss Scotland’s Euro 2020 qualifiers against Cyprus and Belgium in June.

“He’s having an operation and should be out until pre-season,” said Warnock, who denied reports that he had prevented Paterson from playing in Kazakhstan.

“It’s a big blow, it’s no good saying it isn’t. Contrary to what was said before the Scotland game I never spoke to him about not playing on a plastic pitch.

“But he’s had such a bad knee over the last 12 months I think they spoke between themselves.

“The second game was a disaster for us, but it’s one of those things.”

As well as losing Paterson, who is Cardiff’s joint top scorer this season, Warnock was left seething by Iceland’s use of Gunnarsson during the international break and plans to speak to their manager Erik Hamren.

Gunnarsson, who is joining Qatari club Al-Arabi at the end of the season, played 63 minutes in Iceland’s Euro 2020 qualifying victory in Andorra and then the full game in the following 4-0 defeat to France.

“Originally I was told he wasn’t going to play on the plastic pitch for the first game,” Warnock said ahead of the Premier League home game with Chelsea.

“But he played for over an hour and then against France for 93 minutes. I can’t understand that at all really.

“I know it’s a new manager, and you want to do well, but when you’re 3-0 down after 80 minutes surely you can substitute a player.

“We bent over backwards for Iceland last season to allow him to go to the World Cup and get him a new contract.

“He had three months this season when he was out and we had to build him back up.

“I was disappointed with the manager of Iceland and I will be speaking with him later. It was pure selfishness really.”

Cardiff return to Premier League action on Sunday after a three-week break, occupying the final relegation spot and two points from safety.

The Bluebirds beat West Ham 2-0 in their last outing and Warnock believes his side can beat the drop.

“We’re still putting the frighteners on one or two other teams,” he said.

“I think the glass is over-brimming at the moment, not half-full or half-empty.

“You forget where we were two years ago and you get carried away, but they keep fighting and coming back when everybody writes us off.”