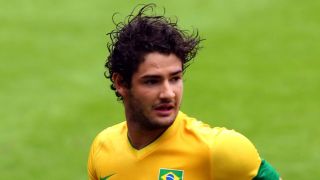 Alexandre Pato is desperate for the opportunity to impress Brazil coach Tite as he seeks to feature at the World Cup finals.

The 28-year-old striker has not appeared for his country since October 2013 and appears hard pressed to force his way into selection contention ahead of the tournament in Russia, which starts in June.

Pato, though, netted 15 goals in 24 appearances to help Tianjin Quanjian finish third in the Chinese Super League, a return he hopes will bring him to the attention of the Selecao boss.

"Well, I've worked all this year thinking [about the] Brazilian [national] team… which means extra physical work out of my house, and [the] gym at home too," he told Omnisport.

"I always worked to go back to the Brazilian team and I think I [played] a great championship. I helped the club to move on to a different level, [higher] than everyone expected."

Shandong Luneng pair Gil and Diego Tardelli, together with Renato Augusto of Beijing Guoan, have not been entirely discounted by Tite, despite being based in China.

And Paulinho has shone since joining Barcelona from Guangzhou Evergrande, leaving Pato optimistic about his prospects.

"I [produced] a great year and I think opportunities appear, such as have appeared for Gil, Tardelli, for Renato… and for Paulinho when he was in China. Now he went to Barcelona," he said.

"I think there is still a lot of time left for the World Cup. I think I have to work and be focused on my work here in China.

"And if it appears - the opportunity - I'll be very happy. I work on 100 per cent to return to the Brazilian team. I think this is my focus.

"In each game, I give my best so I believe, who knows, I can receive an opportunity to [get] back.

"And, who knows, maybe [I could] play a friendly match or anything else involving the national team, so that I can demonstrate my work again to the coach Tite."