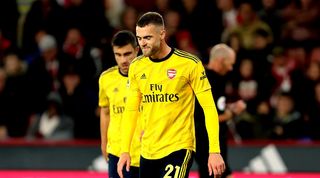 The Gunners have now won only four of their last 18 away games in the top flight, leading to criticism of their attitude and application on the road.

And former Manchester United left-back Evra says he was not surprised to see Arsenal come unstuck in Yorkshire.

"Sheffield United deserved the win, but I'm not surprised about Arsenal," he told Sky Sports. “I used to call them 'my babies' 10 years ago, and they are still, when I look at them and think they are 'my babies'. That's the truth - I'm not being disrespectful when I say that.

“They look pretty, but they don't look like a winning team. They like playing good football, but I was so happy to play against them, because I knew I was going to win.

“Even when Robin van Persie came [from Arsenal to United in 2012], and on the first day I shook his hand, and I said, ‘welcome to a man's club'. At the beginning, he was upset, but after one month he said, 'you were completely right, Patrice'.

“They have big players in David Luiz, [Pierre-Emerick] Aubameyang and [Alexandre Lacazette], but there has been something missing for a few years now.

“Matteo Guendouzi was playing in midfield, but before he was playing in the French second league and he was not even playing regularly - and he's the best player in this team.

“I respect Aubameyang and Lacazette, but if those two guys don't score, they're in trouble, and nothing changes. I'm like, 'where’s Arsene [Wenger]?' It’s the same.”

Arsenal will aim to bounce back when they lock horns with Vitoria in the Europa League on Thursday.