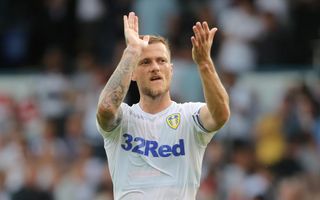 Bamford is expected to go straight back into Leeds’ starting line-up for the return leg of their Sky Bet Championship play-off semi-final against Derby on Wednesday night.

He has served a two-game ban for deceiving the referee in the recent home draw against Aston Villa and, having shown remorse, he now has the chance of swift redemption due to Kemar Roofe’s calf injury.

“There’s no worries about Pat being fit and we all know what he can do,” said Cooper.

“He’s got this unbelievable confidence about him. If he misses chances he always knows he’s still going to score.

“It’s a weird confidence, but a good one to have in the team and we take from that as well.”

Bamford has scored 10 goals in 24 appearances in all competitions for Leeds since arriving from Middlesbrough in the summer in a deal reported to be worth up to £10million.

He feigned injury, falling theatrically to the floor, during a confrontation with Villa’s Anwar El Ghazi in the game which ended in a mass melee at Elland Road last month.

El Ghazi was sent off for violent conduct, but his red card was later rescinded after television replays showed there had been no contact, while Bamford was charged by the Football Association for deceiving a match official.

“He came in straight away and apologised to me and the boys for what happened, and the staff as well,” Cooper said.

“It’s one of those things in the heat of the moment. Sometimes you make stupid decisions and Pat will admit that.

“But this last 10 days he’s been suspended he’s certainly trained a lot harder than he would if he was playing.”

Roofe’s 55th-minute goal in the first leg against Derby at Pride Park on Saturday has given Leeds the advantage, but Cooper insisted they will not be sitting back.

“If we go into this game thinking we have to protect a lead we will be our own worst enemy,” he said.

“So we go to win the game. We’ll commit men forward, we’ll attack as we always do and the best team over the two legs will go through.”

Leeds have had the upper hand in all of their last three meetings with Derby, winning 4-1 at Pride Park and 2-0 at Elland Road during the regular season.

“The game (on Saturday) was a lot closer, that might have been the magnitude of the game, I don’t know,” Cooper added.

“Derby have got a lot of players who can hurt you. Obviously we nullified them to zero shots on target at the weekend, but those games have gone now.

“All focus is on Wednesday and we’ll be looking to go and beat them again.”