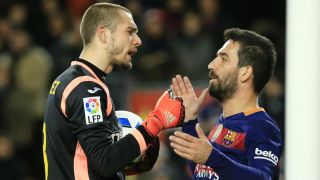 The game was a fiery one throughout, with Espanyol finishing with nine men and Luis Suarez banned for an incident in the tunnel.

The 21-year-old goalkeeper escaped punishment, but his coach condemned his actions.

"He was wrong and made a mistake and I have spoken to him about it privately," N'Kono told Radio 4G.

"He is calm. But people can't undervalue him because of his game. We are all professionals and we deserve the same respect from everyone, whether you're the best in the world or not.

"He is in the phase of learning, and people have to understand that."

The second leg between the two sides takes place on Wednesday at Camp Nou.