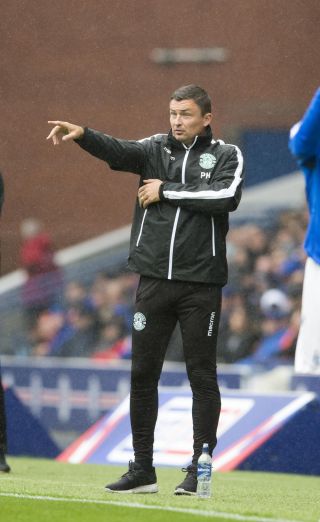 Paul Heckingbottom has been heartened by Hibernian’s pre-international break form but insists the corner has not yet been turned.

The Easter Road side had lost three in a row – including an Edinburgh derby against Hearts – before their Betfred Cup quarter-final penalty shoot-out win over Kilmarnock at Rugby Park.

Draws at home to champions Celtic and away at Aberdeen followed ahead of the trip to Hamilton.

Heckingbottom, who will sit in the stand for the next two games following his ban for his touchline behaviour against the Hoops, told HibsTV: “I spoke before the Kilmarnock game and said we were going to play three of the top four from last year, three of the teams who finished above us and it’s going to be a test and let’s see where we are.

“I’ve come away disappointed with the points return but to put it in perspective and context, also disappointed that we’ve not won the games.

“So you have to take heart from that, the fact that we’ve not been second best.

“I keep getting asked the question do you think you have turned the corner?

“No, not at all and I won’t until I get those wins that we are speaking about because that’s all that matters.

“So whilst I want to take satisfaction from the way the boys have been playing there is also a big frustration that we have not got the wins I think we deserved.”

Heckingbottom is not a fan of watching from the stand but said: “It is only different for me, everyone else is probably doing the same job.

“The difference up in Scotland, I am not allowed in the dressing room 75 minutes before (the game) and half-time so make sure how we are going to communicate but apart from that it will be no different for anyone else.”