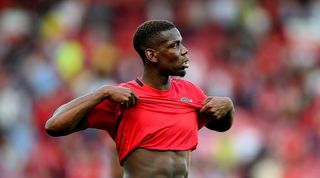 Paul Scholes has criticised Paul Pogba, Nemanja Matic and Ashley Young for their performances in Manchester United's 1-1 draw with Southampton on Saturday.

Ole Gunnar Solskjaer's side took a first-half lead through Daniel James, only to be pegged back when Jannik Vestergaard headed home in the 58th minute.

Southampton were later reduced to 10 men but United were unable to find a second goal, extending their winless run to three matches.

And Scholes believes three players in particular let the visiting team down at St Mary's.

"I'm disappointed. It looked like [it would be a draw] from the moment Juan Mata went off, actually. I was surprised because I thought if anybody was going to create something it's Juan Mata," the former United midfielder told Premier League Productions.

United have not won the Premier League title since Alex Ferguson's final season in management in 2012/13.

And Scholes, who won 18 major trophies at Old Trafford, believes Solskjaer is embarking upon a long-term project to restore the club to its former glories.

"I think you almost have to write United off for the next two years - this team - until Ole Gunnar Solskjaer has cleared everything he wants out, has four or five transfer windows," he added.

"United are going to be behind Manchester City, Liverpool, Chelsea and Tottenham. I think this is United at the minute. You have to be patient with the young players but the experienced players have to step up.

"We've seen over and over again how many mistakes experienced players are making. It's difficult for young players to come into a team like that."

United will attempt to return to winning ways when they take on Leicester next weekend.