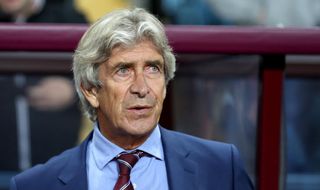 Manuel Pellegrini insists he will “always believe” his high-flying West Ham side can build on their fine start to the season and finish in the European spots.

The Hammers go into Saturday’s home clash with Crystal Palace unbeaten in the Premier League since their 5-0 defeat to Manchester City on the opening day.

Currently fifth, ahead of the likes of Tottenham, Chelsea and Manchester United, Pellegrini is optimistic they can remain near the top of the table, boosted by the belief they are improving “a lot”.

“I always believe,” said the Chilean when asked whether the Hammers could finish in the top six.

“I think you must be always a winner, that you must have a mentality that reflects that at least you are going to make the attempt to do it. After that you will see if you arrive or not.

“But in the way we are playing, I think that we are improving a lot and that’s one of the reasons why we believe we can do it.”

With several of the Premier League’s traditional big guns struggling for form at the start of the campaign, the opportunity could be there for the likes of West Ham to steal a march in the quest for European football.

Former Manchester City and Real Madrid boss Pellegrini prefers not to look  too far ahead, though.

He said: “I think that we must be concentrated and try to continue the way we are playing now. Try to be a solid team in defending and try to continue scoring goals and then we will see which other teams will arrive in the (top) six, or in the first five positions in the table.”

West Ham were dealt a blow against Bournemouth last week when goalkeeper Lukasz Fabianski picked up an injury while taking a goal-kick which could require surgery.

Pellegrini said the club’s medical staff would decide over the next 24 hours whether an operation was needed, but added that either way Fabianski was expected to out for three months.

When asked whether he would be looking at other goalkeepers, Pellegrini replied: “Not for the moment because we have Roberto. I trust a lot in him, he’s (had) a brilliant career in Europe also. I am confident that he will have a good performance.

“But we will decide after we know exactly how long Fabianski will be out.”

Pellegrini also said he had “no regrets” over the summer departure of long-serving goalkeeper Adrian, who joined European champions Liverpool on a free transfer after leaving the London Stadium.

“No, not any regrets, because we did all we could for Adrian to stay here,” he said.

“He’s a player that played six or seven years for West Ham, a goalkeeper I trust in a lot, but for a different reason they didn’t arrive to reach a new contract.”