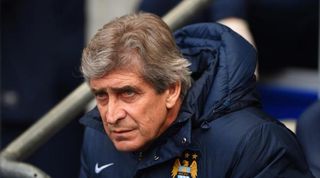 While Hart's existing deal expires in 2016, Milner is out of contract at the end of the current campaign.

Both men have featured prominently for the Premier League champions this term, and Hart is reported to have already agreed terms on a new contract.

Pellegrini has stated his confidence that the pair will both put pen to paper, suggesting an official announcement on the City and England team-mates could be made within the next few days.

"I think Joe is the best goalkeeper in England, he's a very good performer in this moment and in this squad we always need two very good goalkeepers," he said.

"I repeat that the best way to be a good performer is to have good competition behind you.

"Milner? I hope he will sign also. We will see, the same as Joe, if in the next days we can have this as official news but I suppose also that he will sign and continue here.

"He also wants to stay."

Pellegrini was also quizzed about the status of Frank Lampard, with the midfielder currently on loan at the club from the soon-to-be MLS side New York City.

Previously, Pellegrini said a decision on whether Lampard would stay past January would be made in December, but, when asked on whether anything had been agreed, he stated: "For the moment, no."