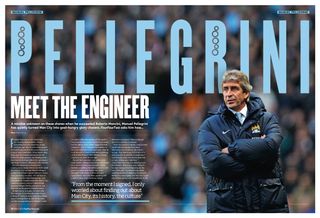 The ‘beast of Vallecas’ has wasted little time proving the Chilean tactician right, scoring 23 league and cup goals in an explosive debut campaign.

Pellegrini has worked with the 28-year-old before, albeit momentarily during his one-season spell at the helm of Real Madrid in 2009/10.

Having scored 32 league goals in two years at Almeria, the Madridistas exercised their buyback option on the Spain international in the summer of 2009, only to sell him to Sevilla within weeks with Pellegrini unable to guarantee him regular football.

Speaking exclusively in the March 2014 issue of FourFourTwo, Pellegrini says he recognised the damage keeping the striker at Madrid would do to his progress.

“He’d just had a great season at Almeria, and I thought that sitting him on the Madrid bench for a year would cut a career that was clearly on the rise.”

Negredo went on to bag a further 86 goals in four seasons in Andalucia before a £20 million deal reunited him with 'The Engineer', who did not need long to convince the powerful front-man to come to Manchester.

“All I had to do was pick up the phone and have a five-minute chat. There’s little doubt the Premier League is the championship for him. He’s made for this league.”

Read the full interview with Pellegrini in the March 2014 issue of FourFourTwo which also means an exclusive sit-down with everyone's favourite Mario, origins of the terrace chant, on the ground with troubled Hyde, England's first foreign legion, David Ginola One-on-One, football's fashion disasters, trending in the Champions League, and is passion all it's cracked up to be? Available in print and in a specially-designed-for-iPad version.