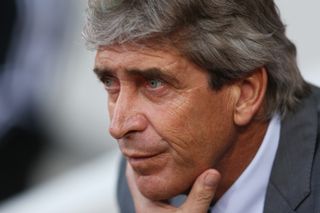 The Chilean is highly critical of the surface in Moscow, with CSKA having played their last UEFA Champions League fixture against Viktoria Plzen at the Petrovsky Stadium in St Petersburg.

As well as condemning UEFA for allowing the Group D tie to be played at the venue, Pellegrini has suggested that a downpour prior to kick-off could see it postponed.

"I think it's unbelievable that the most important cup competition in the world is allowed to be played on this pitch," he said.

"I think we will be praying. If it is raining I think it is impossible, unbelievable that we will be playing on this pitch.

"This is the most important competition in the world (for) clubs and I think it deserves a better pitch."

Pellegrini's side can move three points clear of CSKA in Group D with a win.

While he is not concerned by potential injuries due to the state of the pitch, Pellegrini questioned UEFA's decision to use the stadium.

"If (on Wednesday) it is not raining, it is not a risk to injury," he added.

"I am surprised because they did not allow them to play the game against Plzen here.

"I think the people from UEFA that review the pitch, he must not give the authorisation to play here."