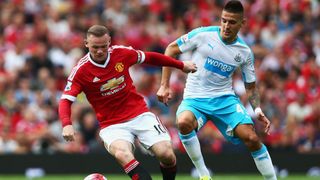 Rooney had drawn criticism for his output this season, with the 30-year-old scoring twice and assisting one in his first 15 appearances in the Premier League.

However, Rooney has three goals and an assist in his last two games - scoring twice against Newcastle in a 3-3 draw on Tuesday.

Mitrovic, who scored in the same game, said people who knock the United skipper are those who do not watch football.

"They are crazy," said the Serbia international. "They are people who don't watch football.

"If he doesn't score in a few games, then the team don't play well and he cannot play well.

"You can see on the pitch the way he plays during the whole game, how easily he plays. I think he can play for 10 years more."

Mitrovic added he was "proud" to have the chance to play against the 109-time England international.

"It's my second time to play against him and I got his shirt afterwards," he said. "It was really amazing.

"He is a legend and he has scored so many goals. For me it is always nice and I'm very proud to have the chance to play against him.

"You can see on the pitch how easily he moves. He is a very good player.

"I hope maybe one day I can be like Wayne Rooney. Maybe then some young players will be proud to play against me. That would be amazing."