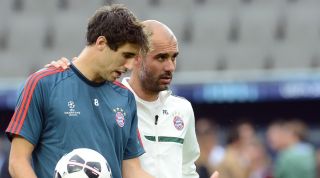 Javi Martinez says when Pep Guardiola was in charge at Bayern Munich he would constantly ask him about Marcelo Bielsa.

Martinez arrived at Bayern a year before Guardiola was named manager in 2013, having previously worked under Bielsa at Athletic Bilbao.

"When I was training under Pep, he came to me again and again and asked me about my time with Bielsa," the Spain international told Goal.

"He wanted to know how Bielsa trained, how he dealt with players - but this respect is mutual.

Both coaches are now managing in England, with Guardiola boss at Manchester City and Bielsa into his second season at Leeds United.

The Spaniard has made no secret of how much he admires the Leeds head coach, quoted by Goal in 2017 as saying:

"My admiration for Marcelo Bielsa is huge because he makes the players much, much better.

"Still, I didn't meet one guy, a former player from Marcelo Biesla who speaks no good about him. They are grateful about his influence on their careers in football.

"He helped me a lot with his advice. Whenever I speak with him I always feel like he wants to help me.

"It is important for me to say this about Marcelo because it doesn't matter how many titles he had in his career. We are judged by that – how much success we have, how many titles we have won.

"But that is much less influential than how he has influenced football and his football players.

"That is why, for me, he is the best coach in the world."

So it should perhaps come as no surprise that Guardiola wanted to tap into Martinez' knowledge of his coaching icon.

He could come up against Bielsa next season should the Argentine get Leeds promoted. They are currently second in the Championship table, although have suffered a blip in form of late with four defeats and only one win in their last seven league matches.