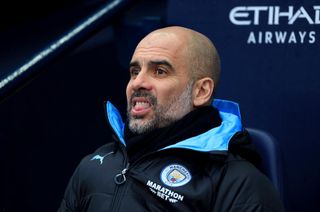 Pep Guardiola has called on Manchester City supporters to fill the Etihad Stadium as they look to secure another trip to Wembley this week.

The City boss wants to see a full house as holders City host rivals Manchester United in the second leg of the Carabao Cup semi-final on Wednesday, hoping to complete the job after winning 3-1 at Old Trafford.

He said: “Now we have three days to prepare (to play) against United. Hopefully our fans can come and make our stadium full.

“The determination was always there in the Premier League. We are still there fighting every single day, especially at Sheffield United (last week).

“Now the determination is the next one, the Carabao Cup second leg to get to the final. That is the target.”

City were not tested by Championship Fulham, whose hopes effectively ended when captain Tim Ream was sent off for denying Gabriel Jesus a goalscoring opportunity after six minutes.

It's all about the T E A M 👊🏼 #CmonCity#FACup@mancitypic.twitter.com/203cmvFhr2— Ilkay Gündogan (@IlkayGuendogan) January 26, 2020

Ilkay Gundogan scored from the resulting penalty and Bernardo Silva added a second. Jesus wrapped up victory with two more in quick succession after the break.

Guardiola said: “After one or two minutes I thought it would be a tough tough game. I knew after watching them against Charlton and Leeds it was a team with a lot of courage, that’s why they are where they are in their position in the Championship.

“But after the red card it was a little bit different.”

City’s four goals took their tally for the season in all competitions to 102.

Guardiola said: “We always score goals, especially the last three seasons. We always had the ability to score but the problem is that we concede few (chances) but that ends in a goal too often this season.

“But in general the team always scores goals.”

It was always likely to be a tough afternoon for Fulham and manager Scott Parker admitted his plans were ruined in the early stages.

The former England midfielder said: “We understand the challenge ahead when you come to play a world-class team but the plan and preparation you do goes out of the window after six minutes when you go down to 10 men and they score a goal.

“It would have been a hard game with 11 men but with 10 it makes it even more difficult.

“Tim Ream is obviously devastated. In the heat of the moment you make decisions and sometimes you make the wrong ones.”