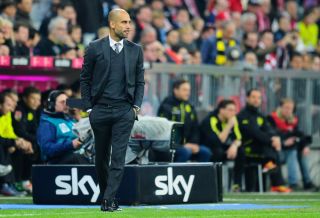 Bayern were not at their scintillating best in Wednesday's semi-final at the Allianz Arena, but still engineered a fine performance to progress in comfortable fashion.

Bastian Schweinsteiger opened the scoring after 23 minutes before a fine curling finish from Toni Kroos and a Thomas Muller penalty put the game beyond doubt.

Simon Zoller did pull one back for Kaiserslautern, but late goals from Mario Mandzukic and Mario Gotze rounded off an easy victory for holders Bayern.

The win sets up an enticing clash with Borussia Dortmund, who beat Bayern 3-0 last weekend, in next month's final in Berlin and keeps the Bavarians' hopes of a second straight treble very much intact.

And Guardiola was quick to hail his players for their spirit as Bayern returned to winning ways.

"Kaiserslautern were very courageous from the start," Guardiola said. "We had problems with our possession of the ball.

"It's never easy to score five goals, regardless of the opponents or the competition you're playing in.

"I am happy about how we fought. I am looking forward to playing in the final."

Midfielder Kroos was disappointed with Bayern's display before the first two goals, but was happy with the freedom the Bundesliga champions displayed after establishing command.

"Our first two goals did us good," Kroos said.

"Before then we were not quite there, had no opportunities and did not play smoothly.

"After that, we were a bit more free and played better. I look forward to the final."