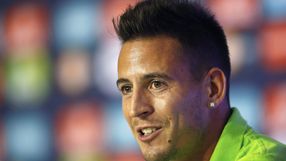 Spain and Portugal meet in the first Euro 2012 semi-final in Donetsk on Wednesday.

"We have a team with personality and we can't make any mistakes in the defence, because they [Spain] are very strong," Pereira told a news conference at Portugal's base in western Poland.

"The players in the midfield are very strong and the passes normally are deadly, so we will try not to make any mistakes and exploit our attack."

Pereira declined to sign up to suggestions by some team mates that they can take advantage of Spain's struggle to find the best formula up front in the absence of injured Barcelona striker David Villa.

Coach Vicente del Bosque has tended to play without an out and out striker, preferring to include an extra creative attacking midfielder in Cesc Fabregas ahead of Fernando Torres.

That has paid dividends so far although Spain struggled to score against Croatia in the group stage and had by far their most successful attacking game with Torres leading the line in the 4-0 win over Ireland.