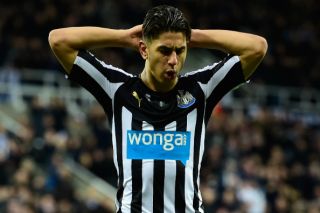 Manager Alan Pardew's horrendous record in the Tyne-Wear derby continued at St James' Park, as their local rivals came to Newcastle and won for the third consecutive visit.

Pardew has overseen only one victory between the two rivals - a 1-0 success at the Stadium of Light in August 2011 - in eight derbies.

Perez, who has scored crucial goals against Tottenham and Liverpool this season, said he felt Pardew was unfortunate not to chalk a rare derby win to his name.

"It was a souring defeat so we aren't very happy about it but now we are focusing on the next game and we need to bounce back," Perez told nufc.co.uk.

"Personally, I think I just need to keep playing well and give my best for the next game so I can help put us in a position to bounce back.

"Overall I think it's an unfair result considering that we played so well but it goes to show that, if you don't score and take your chances, the result won't always reflect how well you play."

Teenager Adam Armstrong tasted his first derby minutes in what was his seventh Premier League appearance - his longest, too, at 31 minutes - and echoed Perez's claim they were hard done by when Adam Johnson netted the winner late  in the game.

"All the lads are hurt by that and, obviously with it being a local derby, you want to win those type of games, but we've just got to push on now and make it right next game," local product Armstrong said.

"There's nothing worse [than conceding late]. I thought we were the better side to be fair but we just didn't take our chances and that's football - they go up the other end, counter-attack and get a goal.

"All the lads are really upset by that and looking to put it right."

Armstrong featured more prominently in Newcastle's League Cup campaign - which saw them post a win at Manchester City - and he said the club's other natives had welcomed him with open arms.

"Being a Geordie lad, to beat Sunderland is everything, but it didn't quite happen today so we've got to put it right next time," he said.

"It's all surreal for me. Still being 17 and getting on in a local derby - there's nothing better. With all the Geordies in the squad, they've really helped me out and I think I'm ready to go again.

"You notice how much it means to the fans, and I myself have been a fan - I am a fan, I've been a fan since I was young and it's the worst feeling getting beat, especially against Sunderland.

"We've just got keep pushing on and make it right next time."