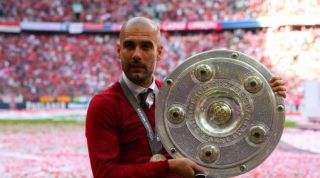 The Bavarian giants retained their Bundesliga title in record time in 2013-14 before beating Borussia Dortmund to win the DFB Pokal, having already lifted the UEFA Super Cup and the FIFA Club World Cup in the Spaniard's maiden campaign at the helm.

Bayern's attractive brand of football was reminiscent of the Barcelona side that was so dominant under Guardiola, but not everyone warmed to his 'tiki-taka' style of play.

Club legend and honorary president Franz Beckenbauer voiced his disapproval with the Spaniard's tactics, saying Bayern were in danger of become "unwatchable like Barcelona."

Guardiola was in the firing line again after Real Madrid ended Bayern's hopes of retaining the UEFA Champions League with a 5-0 aggregate win at the semi-final stage.

Real hammered Bayern 4-0 in the second leg at the Allianz Arena to ensure Guardiola was unable to repeat the feat of his predecessor Jupp Heynckes, who retired after winning the treble.

By then, Guardiola's side had already been crowned Bundesliga champions at a canter, winning the title in March with an astonishing seven games to spare and finishing with a mammoth 19-point lead over Dortmund.

Bayern went on to extend their unbeaten run in the German top flight to a record 53 matches before being consigned to a 1-0 defeat by Augsburg, but the Spaniard's critics had the knives out again as they questioned his decision to rotate his squad and questioned his motivational skills.

Guardiola is a renowned perfectionist, so he took the derogatory comments on the chin as he set about plotting an improvement for his second season in charge.

"We have to keep working. There is much work left to do," he said. "I still have not managed to form the team according to my vision. It is after all my first year.

"My German is not that good yet and to succeed Jupp Heynckes after his success was a challenge but four titles are not bad."

He described his debut campaign with the five-time European champions as "a difficult year", so expectations are higher than ever as a squad containing many of Germany's World Cup winners eye more glory in 2014-15.

Guardiola masterminded Champions League glory at Barcelona just less than a year after a side packed with Spain stars were crowned world champions four years ago.

If the 43-year-old can inspire Bayern to the famous trophy next May, then the likes of Beckenbauer will no doubt be far less vociferous.