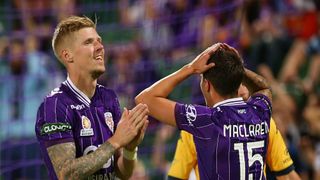 The FFA found Perth "deliberately failed to disclose" 400,000 Australian dollars worth of benefits and payments to six players this season.

When the 27 rounds of the A-League regular season are completed, the Glory will be relegated to seventh - outside the top-six positions required to compete in the finals.

Perth have topped the A-League standings for the majority of the season and currently sit second, only behind leaders Melbourne Victory on goal difference.

Perth have seven days to appeal.