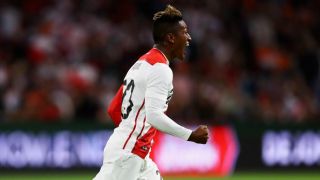 Substitute Pedro Aquino scored a late brace as Peru claimed a deserved 3-0 victory over South American rivals Chile in an international friendly in Miami on Friday.

It was a dominant performance at Hard Rock Stadium, where Peru were rewarded for their superior display thanks to an Enzo Roco own goal and Aquino's second-half double.

Chile defender Roco turned the ball into his own net just past the hour-mark before Aquino sealed the win with two goals in 11 minutes as Peru snapped a run of back-to-back defeats following the World Cup.

Arturo Vidal – struggling for regular game time at LaLiga champions Barcelona – was in Chile's starting XI, but Alexis Sanchez was absent due to his visa issues in the United States, with the Manchester United forward set to face Mexico in Queretaro on Tuesday.

Peru dominated from the outset and Chile – who had drawn consecutive games ahead of the fixture – somehow managed to head into the half-time break on level terms.

Peru finally scored the goal their dominance deserved 19 minutes into the second half thanks to some help from Roco, who conceded an own goal after team-mate Ignacio Jeraldino was dispossessed trying to shield the ball out of play.

Chile were carved open again in the 75th minute – Edison Flores squaring the ball to the unmarked Aquino to side-foot home before the 23-year-old added a second with four minutes remaining.