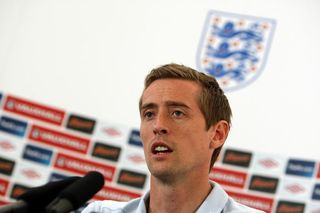 Former England striker Peter Crouch has announced his retirement from football at the age of 38.

The 6ft 7ins forward made his English league debut in 2000 with QPR and went on to play for nine clubs, including Liverpool, Portsmouth, Tottenham and Stoke, before spending the second half of last season at Burnley.

Crouch’s first England cap came against Colombia in May 2005 and he played 42 times for the Three Lions, scoring 22 goals.

After a lot of deliberation this summer I have decided to retire from football ! Our wonderful game has given me everything. I’m so thankful to everyone who helped me get there and to help me stay there for so long. X— Peter Crouch (@petercrouch) July 12, 2019

In a statement on Twitter, Crouch said: “After a lot of deliberation this summer I have decided to retire from football.

“Our wonderful game has given me everything. I’m so thankful to everyone who helped me get there and to help me stay there for so long.

“If you told me at 17 I’d play in World Cups , get to a champions league final , win the FA Cup and get 100 Premier League goals I would have avoided you at all costs. It’s been an absolute dream come true.”

Crouch released a book, ‘How to be a Footballer’, last year, and has also worked in the media.

In a lengthy column for the MailOnline, published soon after his announcement on social media, Crouch admitted he was not entering into the unknown.

“My ambition was to play until I was 40, so it is scary saying the word ‘retirement’,” he said on www.dailymail.co.uk.

“It has left me emotional and it feels weird not to be preparing for a new campaign, but circumstances over the last couple of seasons have made me realise that this is the right thing to do.

“To go from being a regular starter to someone whose role is limited to 10 or 15 minutes off the bench has been hard to accept.

“I will be 39 in January, but I am physically fit and could have carried on. What I didn’t want to be was someone who was thrown on to have balls smashed up to them.”

Crouch, who won the FA Cup with Liverpool and helped them reach the 2007 Champions League final, added he was looking forward to spending more time with his family, having recently had a fourth child with wife Abbey Clancy.

“This former footballer had the time of his life. It’s time to write the next chapters,” he said.