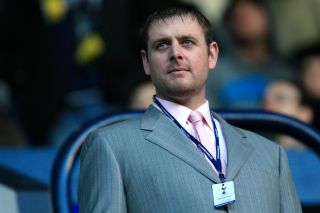 Peterborough owner Darragh MacAnthony has criticised the English Football League’s handling of the crucial vote on Tuesday which saw the League One and League Two seasons curtailed.

MacAnthony has been outspoken on the process which has seen Peterborough narrowly miss out on a place in the League One play-offs, hitting out at football clubs for voting against playing football.

But the Posh owner on Wednesday suggested his club had been misled as the EFL had indicated for several weeks that the season would be completed, leading them to opt against furloughing players.

“Every letter from the EFL stated that we wanted to finish the season and we went along with that,” MacAnthony said on Sky Sports’ ‘The Football Show’.

The state of my timeline 🤣full of fans loving the fact that 18 'football clubs' voted to not play football & the ramifications of it. Bravo to the 4 Football clubs who did vote to play on. The @EFL@SkyBetLeagueOne shit show draws to a close. Enjoy your summer football fans 😎— Darragh MacAnthony (@DMAC102) June 9, 2020

“We voted for football. We will always vote for football. I understand the health concerns but we’ve now been told football is back – the Premier League is back, the Championship is back. The EFL is 71 clubs and we’ve been told we can’t play football so it’s devastation and disappointment.”

MacAnthony also said he was disappointed the EFL had not done more to balance out Tuesday’s bad news by presenting plans to start next season, or to provide financial relief as clubs struggle with the loss of revenue.

“So many things could have been done in the last four or five weeks that weren’t done,” he said. “That’s why I’m disappointed with the EFL. It would have been lovely to find out what are we looking at starting date wise.

“Have you, the EFL, had a conversation with the PFA about wage cuts?

“Has the EFL done a deal on the bailout? We’ve had some really crappy news, so give us some good news for the future.”

Southend chairman Ron Martin, who is facing up to relegation from League One, was far less scathing in his opinion of the EFL.

He said on the club’s website: “I do not criticise the EFL conduct, although there is as much merit in voiding the season (under which circumstances each club would remain where they are) as there is in curtailing the season.

“Covid-19 has had a devastating effect on many peoples lives, their families and friends. Circumstances that will haunt hundreds of thousands of people for years to come, if not forever.

“Against that backdrop, what right have we got to be ‘disappointed’ about our club being relegated at this unprecedented time. We are strong and Southend United will emerge from the trauma that is affecting the entire world and impacting its people.”

It is understood the EFL and other sports governing bodies are in first stage discussions with sports minister Nigel Huddleston and Jonathan Van Tam, the deputy chief medical officer, about the conditions needed in the country for the partial reopening of stadia to occur.

No timetable will be set out at this stage, and no mass gatherings are expected to be allowed until the autumn at the earliest.

Forest Green chairman Dale Vince says his club is budgeting on the basis of receiving no traditional matchday revenue at all in 2020-21, but hopes that a phased reopening will be possible.

“If fans come back at some point then that’s a bonus,” he told the PA news agency.

“I don’t think we’ll go from no fans to all fans, I think there will be some kind of staging posts, maybe 20 per cent occupancy might be the starting place for example and release our way back.”

The EFL released news from its latest round of Covid-19 testing on Wednesday evening, with a total of eight positive results.

Six of those came from four clubs in the Championship, with 1,192 players and staff tested. One of those is likely to be Stoke manager Michael O’Neill, who is already self-isolating following a confirmed diagnosis.

There were two positive tests from a sample size of 137 among the four play-off teams in League One, with Portsmouth announcing two of their players were responsible.

The equivalent teams in League Two came back with a clean bill of health.