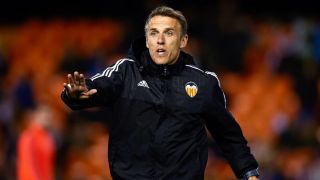 The Lionesses have been without a manager since Sampson was dismissed in September, with misdemeanours during his time with Bristol City's academy leading to his departure.

Sampson had also been embroiled in a race row having allegedly discriminated against Eniola Aluko, though the Football Association (FA) insisted at the time that his dismissal was not connected.

A number of candidates had been linked with replacing Sampson – who led the team to unprecedented success, including a semi-final spot at the 2015 World Cup – but Phil Neville appeared to emerge as the favourite in early January.

Neville came through the ranks at United as a member of the famous 'Class of 92' alongside brother Gary Neville, Ryan Giggs, David Beckham, Nicky Butt and Paul Scholes, going on to play professionally at Old Trafford for 11 years.

The 41-year-old's playing career came to an end in 2013 and he has since held several coaching roles, including under David Moyes at United and as Gary Neville's assistant with Valencia.

Now he will set out on his own path and the FA will be hoping that the arrival of someone with such experience within the men's game boosts the ever-growing popularity of women's football in England.

Speaking of his appointment, Phil Neville told the FA's official website: "I am honoured to be given the chance to lead England.

"With the new coaching team we are putting in place, we can help the players build on their great progress in recent years. This squad is on the verge of something special and I believe I can lead them to the next level."

Extremely proud and honoured to be the head coach of the and Im unbelievably excited about the challenges ahead!! January 23, 2018