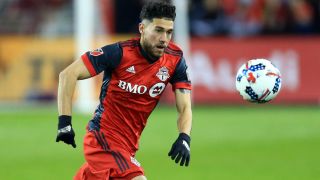 Toronto claimed a much-needed win thanks to Jonathan Osorio's brace in a 2-0 victory at Philadelphia Union.

MLS champions last season and CONCACAF Champions League finalists this year, Toronto had only won one of their past five games prior to Friday's trip to Philadelphia.

But Toronto secured a valuable three points via goals from Osorio in either half at Talen Energy Stadium.

Osorio opened the scoring in the 19th minute when Victor Vazquez's pass split two defenders and the former put the ball past Union goalkeeper Andre Blake.

No one threads the needle like VV. with the finish for the early lead | June 9, 2018

The points were sealed with 11 minutes remaining after Osorio latched onto a Sebastian Giovinco pass and added his second goal of the match.

Toronto moved up to ninth in the Eastern Conference, four points adrift of the seventh-placed Union.