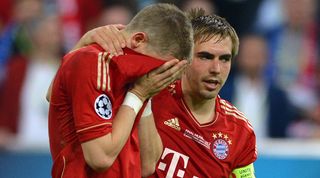 The Blues were surprise winners on penalties in the European showpiece five years ago, beating Bayern on the Germans’ own turf after Didier Drogba cancelled out Thomas Muller’s late striker in normal time, then Arjen Robben missed a spot-kick in extra time.

But Bayern recovered to claim the three big trophies on offer in 2012/13 – beating Bundesliga rivals Borussia Dortmund in the Champions League final at Wembley – and Lahm believes the bitter defeat to Chelsea made them focus on their next steps.

Speaking as part of the new FourFourTwo Films production, How to win the Champions League by the men who have done it, Lahm says: “It was definitely motivation for the next year. It was the question: is the team falling apart after that defeat or would it help us to grow closer?

“The 2012 final made us grow together – it was the kick-off for the following year. It was a strong motivation and had impressive effect, as we won the treble.

“Looking back, I can say it was an outstanding event, but with the wrong result.”

Bayern outplayed Chelsea for much of the contest and thought they had finally broken Roberto Di Matteo’s side’s resolve with seven minutes of normal time remaining when Muller headed home.

But after Drogba had nodded in an even later effort to level the match, things got worse for Bayern when Robben saw a penalty saved by Petr Cech in extra time. To compile the misery, Ivica Olic and Bastian Schweinsteiger then followed suit in the decisive shoot-out. Lahm had scored his spot-kick.

Despite what followed, the match still brings back sorrow for the 33-year-old, who played his final game for the Bundesliga champions on Saturday.

“The memories are not that good,” he told FourFourTwo. “We played at home in Munich – it was written on my boots: ‘Mir san dohoam’ (we are at home Bavarian slang).

“[But] it was an incredible experience to play a Champions League final in your home town, in your own stadium.

“We were the favourites and we played like that. We dominated the game, our performance was good, but we didn’t have much luck with dead-ball situations.

“Chelsea scored the equaliser and we had to go into extra time. Then we missed a penalty and finally lost it after penalties.”