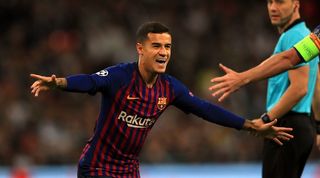 Chelsea will attempt to sign Philippe Coutinho from Barcelona if their transfer ban is delayed or overturned, report the Daily Mirror.

The Blues were found guilty of breaking FIFA rules on the signing of under-18 foreign players and handed a two-window transfer ban as punishment.

Their initial appeal was rejected by world football's governing body, but the west Londoners - who were crowned Europa League champions after beating Arsenal 4-1 on Wednesday - are preparing to take their case to the Court of Arbitration for Sport.

And if they are permitted to make additions to their squad this summer, Chelsea want to acquire Coutinho as a replacement for Real Madrid-bound Eden Hazard.

The Brazil international has struggled to make an impact at the Camp Nou following his move from Liverpool in January 2018.

Barcelona may be willing to cut their losses as they seek to rebuild their squad, while Chelsea hope that the chance to replace Hazard as their key attacking star would appeal to Coutinho.