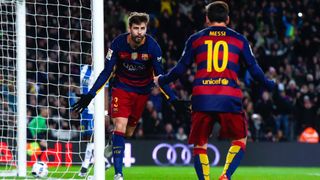 Barcelona moved a step closer to the quarter-finals thanks to a 4-1 win over nine-man Espanyol in a feisty first-leg encounter at Camp Nou.

And the Spain international stoked the fire ahead of next week's return leg, telling reporters: "They call themselves the 'marvellous minority', and they're in such a minority that they can't even fill their ground.

"Let's see whether they manage to fill it for the return leg, because the other day it wasn't full."

Espanyol duo Hernan Perez and Pape Diop were sent off within three minutes of each other in the second half as tensions boiled over in the opening leg on Wednesday.

Barca forward Luis Suarez was also accused of allegedly provoking Espanyol players in the tunnel following the victory, which was sealed by Neymar two minutes from time after Felipe Caicedo's ninth-minute opener.

Sergio Busquets added: "It was an intense game with a lot of confrontation. But I don't think there was anything outlandish.

Espanyol host Barca in the second leg on January 13.