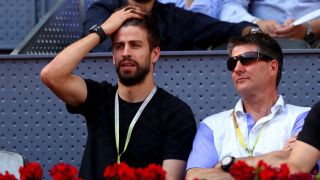 Barcelona defender Gerard Pique has vowed to create a media outlet for the benefit of professional footballers following what he insists are false allegations that he was caught speeding.

Photographs emerged on Friday of the Spain international speaking to police through the window of his car on the hard shoulder of a busy main road in Catalunya.

The images were published by the online versions of a number of UK-based newspapers, who said that Pique had allegedly been pulled over for speeding and reckless driving.

Pique insists the allegations were drummed up by a paparazzo hoping to sell photographs and says he is "fed up" with what he claims is a persistent misrepresentation of the truth within some sections of the media.

"I will now explain to you how the majority of the press works these days," he wrote via his official Twitter account.

"1. A paparazzi [sic] takes a photo of you talking with the Mossos d'Esquadra [Catalan police force].

"2. The paparazzi makes it up that I was doing 190km/h and that I got six points on my licence in order to sell photos for 1,500 euros. All false.

"3. An English site buys the photos without taking into account the truth of the story.

"4. The majority of the sites of this country publish the news without corroborating the information. All in order to get more clicks.

"5. The damage has already been done and nobody does anything to change this dynamic.

"6. My objective in the coming months is to create a means of communication that is different, true, authentic and for the players. I'm fed up."

Pique returned to Barca training this week following a bout of illness ahead of Sunday's final round of LaLiga matches.

Luis Enrique's side host Eibar at Camp Nou needing a win and a defeat for Real Madrid at Malaga in order to win the title for the third season in a row.