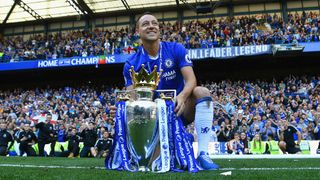 John Terry acknowledges the pull to continue his career after leaving Chelsea is strong and experienced former team-mates with club and country have cautioned him against a hasty retirement.

The 36-year-old was substituted after 26 minutes of the 5-1 win over Sunderland – to match the squad number he has worn across 717 Chelsea appearances – and received a guard of honour from his fellow players.

After celebrating being presented with the fifth Premier League title of his career, Terry, who has been reduced to a bit-part role under Antonio Conte, revealed he had spoken to Frank Lampard and Jamie Carragher to seek their advice over his next move.

"I need to take a step back away from the bubble and say, 'What does John Terry want to do?'," he said.

"Once you stop, that's it. I have put in a few calls to ex-players, Jamie Carragher, Lamps. Everyone says, 'Play as long as you can.'

"I never want to be that player who says, 'I wish I'd played a couple more years.' You can’t replace these moments.

"When I went out to play against Watford last week, the smell of the grass where it had rained and it was a little bit zippy – all of those things you take for granted over the years. They are the things you are going to miss.

"Ideally, I want to play as long as I can. ­Physically, I know I can. This year I'm probably fitter than I’ve ever been. Under a manager that works with me on the tactical side of things it takes four or five games to get the sharpness. But the hunger is there inside me to push on and win stuff.

“Everything is an option. I’m not ruling anything out. Whether that be retirement, playing, going into management – I’m halfway through my B-Licence – this or that."

Terry added: "We all think we can play on until we’re 40, but if ever there was a way to go out it was like this."

Omnisport understands the Football Association has asked betting companies to provide any relevant information following reports punters won money by wagering on the time of Terry's pre-planned substitution against Sunderland.