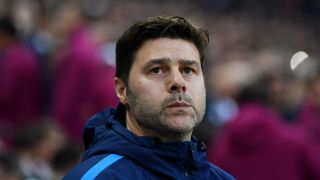 Tottenham manager Mauricio Pochettino said it will not be easy for Spurs in the transfer market, despite qualifying for the Champions League.

Spurs will feature in the Champions League for a third consecutive season as they look set to finish third in the Premier League – victory over Leicester City on Sunday would secure that position behind champions Manchester City and second-placed Manchester United.

But Pochettino expects a difficult off-season as Spurs try to compete with the likes of City, United, Chelsea, Arsenal and Liverpool.

"The number of players will be limited, like every season, and the market today is going up," Pochettino said. "The last few seasons have become crazy, no?

"But in the end, there are a number of players who can help you improve. Then of course if you have a strong financial side you can go buy some players.

"But of course it is not new for us - we have priority players to sign but they go to a club with more money.

"You say, 'OK, we need to find another option'. Sometimes you need to sign opportunities when you can't get your top priorities.

"To be sure it is complicated. It will be a new experience for everyone because the transfer window is going to close before the start of the season. No one knows what will happen.

"Of course we are working to deliver what is best for the team. It won't be easy but we are going to try."