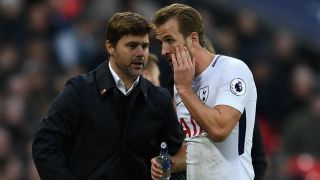 Mauricio Pochettino has endorsed Daniel Levy's claim that no Tottenham player will leave against the club's wishes ahead of the 2018-19 season.

Spurs chairman Levy this week stated he is "100 per cent confident" the north London side will retain their prized assets, both this month and during the off-season transfer window.

Tottenham's star centre-forward Harry Kane is expected to be the subject of interest from some of Europe's biggest clubs as he enjoys another prolific campaign.

Pochettino, though, is encouraged by the staunch stance of Levy, who is known for his uncompromising approach to recruitment and negotiations.

"Of course, the chairman is the man who manages everything and in the end takes all the decisions," Pochettino said ahead of Tottenham's Premier League match against Everton on Saturday.

"Always for the fans it's important to hear him. Every word that he said yesterday we need to respect because he's our boss. If he was talking in this way it's because he's confident to deliver it for the club.

"Of course, all the clubs and the managers want to keep their best players and we are in the same way, to keep the best and try to make the team stronger each season. That is [what] all the managers, players and the chairman in this case want for your club."

While Spurs are braced to ward off potential approaches for their top talent, it remains to be seen if they will move to reinforce in the weeks ahead, with Pochettino offering little indication that signings are imminent.

"I think you know how the business is today," he said.

"I think Tottenham is a club that in three and a half years I've seen a minimum of 100 names linked and in the end we sign a few.

"Until today, now, nobody is close to arriving in this transfer window. Maybe in the last five minutes since we came in here, who knows," he added, prompting laughter among the journalists.

"But when we stepped into this room nothing.

"We're working. We're awake to the market. If something is available on terms we can take, of course we'll do it. But if not, it's difficult."