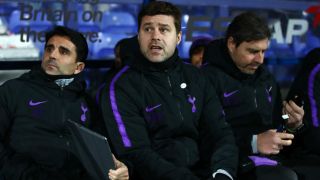 Tottenham boss Mauricio Pochettino does not expect the club "are going to do anything" during the January transfer window.

Spurs completed a 7-0 demolition of League Two side Tranmere in the FA Cup on Friday, meaning they remain in the running to win four competitions this season.

Son Heung-min scored in the rout but will now head off on international duty with South Korea at the Asian Cup, leaving Pochettino without one of his key performers ahead of a crucial run of fixtures.

Next up is the first leg of the EFL Cup semi-final against Chelsea, while their next Premier League fixture sees a rejuvenated Manchester United visit Wembley next weekend.

Spurs did not add to their squad in the previous window and Pochettino dismissed the idea of any new arrivals coming in during this month, too.

"I don't believe that we are going to do anything," he told the media after the cup game.

When asked if he felt his squad was strong enough to cope with such a busy fixture list, the Argentinean added: "I'm so happy with my squad. Always you can improve, different things you can or not."

Thanks for your superb support tonight#COYSpic.twitter.com/V9N3ccxRVw— Tottenham Hotspur (@SpursOfficial) January 4, 2019

Fernando Llorente seized the chance to start in the third-round tie, scoring a second-half hat-trick as Tranmere conceded six goals after the break.

The Spanish striker has been linked with a return to his homeland, with former club Athletic Bilbao and Valencia linked, and his deal with Spurs expires at the end of the campaign.

"Yes, it's a six-month contract with the club and we will see what happens," Pochettino said about Llorente's future.

"As I explained for different players, it's not only in our hands, it's what the player wants. Of course, now the window is open we're going to talk."

Pochettino showed no mercy on Tranmere, playing Dele Alli for the full 90 minutes and bringing Harry Kane – who scored the final goal in the rout – off the bench with the score at 6-0.

"It's important for him to score and have 20 minutes playing football," Pochettino said of Kane.