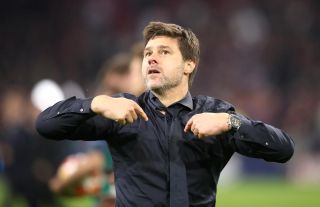 Boss Mauricio Pochettino says Tottenham will be going all out to secure a fourth successive top-three Premier League finish as they close their domestic season on Sunday.

Spurs are all-but guaranteed a top-four finish and they have the small matter of the Champions League final to consider, but Pochettino wants to finish strong against Everton.

It could be easy to concentrate on the Madrid showpiece on June 1, which Pochettino has conceded is the biggest game in the club’s history.

But they will finish as the highest placed London club for only the second time since 1995 if they can better Chelsea’s result at Leicester and that is what the Argentinian is concentrating on.

“We are in a moment, living a dream. It’s difficult to be in the reality,” he said.

“It’s our responsibility to create the atmosphere of competition because Sunday is an important day for us. To be ready is our first priority.

“To finish in the right way, in front of our fans, is the most important thing now. Of course, it was an amazing moment, one of the best we live all together after five years.

“I know very well it’s difficult to stop to think after all we achieved on Wednesday but our responsibility is to be ready.

“We’re in a good position, it’s almost but it’s not done.

“Of course it’s better to finish third than fourth but the objective is to finish in the top four and it’s almost done but we have one more game.

“Everton has great momentum, very competitive and they finish the season very well.

“They have very good players and it’s normal that they’re going to come here to compete. They had a clear week to prepare. We cannot be distracted, we need to be focused on our game.”

As if you needed reminding…#PLpic.twitter.com/JorY1uF9rM— Premier League (@premierleague) May 9, 2019

Only a freak set of results would see Spurs miss out on the top four. They would have to lose, Arsenal would have to win at Burnley and there would still need to be an eight-goal swing.

Tottenham have already shown anything is possible with the manner of their Champions League semi-final comeback at Ajax, so Pochettino is taking nothing for granted.

“In football, all can happen, it’s about belief,” he added. “We must believe that we need to win on Sunday.

“Our objective must be to finish third. That’s the way we need to take the game and then what happens, happens.

“The most important thing is the responsibility we need to feel, we need to compete at our best to win the game. Don’t think too much, only think to play well to finish the season.”